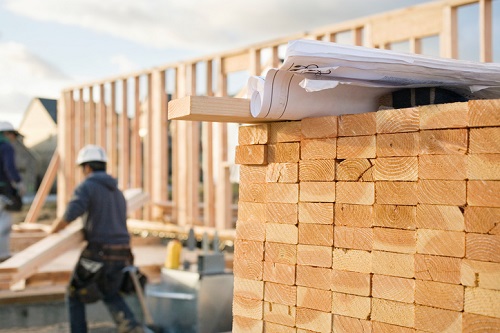 Lumber prices continue to tumble after hitting an unprecedented high during the pandemic.

Despite the recent decline, lumber prices remain significantly elevated compared to pre-pandemic numbers. In March last year, benchmark prices ranged between US$550 (about $684) and US$600 (about $746) per thousand board feet, according to data gathered by Natural Resources Canada.

Why are lumber prices falling?

Experts attribute the drop to the unwinding of pandemic factors that pushed up lumber prices. These include the easing of lockdown restrictions, which confined many Canadians to their homes. Trapped inside their residences, many diverted the money they would have otherwise spent on travelling to home renovations, hiking up demand.

“We have people looking to do renovations to their homes, new home builds. You’re in your home a lot more, you’re finding out what’s bothering you more, so you want to fix that,” Alexis Foster, executive officer of the Canadian Home Builders’ Associations (CHBA), told CBC News in May.

But with prices hitting record-breaking highs, the market started to see some resistance from buyers.

“Over the past six weeks to two months, [there has been] a lot of pushback from the customers where they’re holding off on buying in the hopes that the lumber prices will go down – a very successful effort on their part,” said Keta Kosman, publisher of Madison’s Lumber Reporter, in her mid-summer 2021 update video.

Because of this, some experts say that new home prices reached a saturation point where demand also began to nosedive.

“The softer-than-expected April housing starts was clearly a turning point for market sentiment,” Carl Campus, Bank of Montreal (BMO) economist, wrote in an analysis. “With demand finally blinking, the supply side appears to have gained a better footing, relieving near-term price pressures.”

Will lumber prices continue to fall?

A recent analysis by BMO predicts that lumber prices will continue to tumble until next year, due in part to affordability concerns.

“Household wallets are not unlimited and, at some point, demand could shrink amid a reluctance to shell out extra dough for the same studs and sheathing,” the bank said.

A drop in supply as sawmills slow down production, along with tightening of rates, is expected to push down prices of spruce-pine-fir lumber by an average of US$415/mbf (about $516), a more than 60% decline from current prices, according to the bank.

Experts caution buyers, however, not to expect lumber prices to return to pre-pandemic levels soon.

“We’re in month number 12 of what we believe to be a 24-to-30-month cyclical bull wave,” Kyle Little, chief operating officer of Sherwood Lumber told CNBC in an interview last month. “We really believe the new three-year mean will be much, much higher, almost two times what we’ve seen the previous 20 years.”

The industry veteran also suggested that it would be a good idea to delay discretionary building projects until prices go down.

“The jobs that you have coming up, don’t expect us to go back to what we saw the previous 10 years. That being said, if you can wait, there’s no reason not to,” he said.